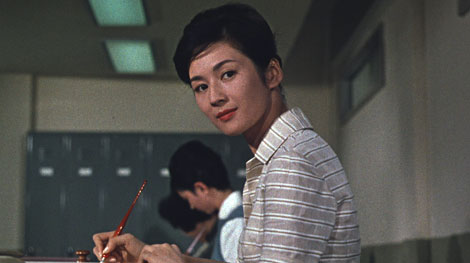 先週１２月１２日ニューヨークのJapan Society で映画監督小津安二郎の、生誕１１０年没後５０年を記念イベントが開催されました。後期の傑作「秋日和」が上映され、レセプションも。私も、小津映画を西側に広めるパイオニアであり、今でも多くの映画人に影響を与え続けているDonald Richie 氏（本年２月１９日逝去）の功績を讃えつつ、小津映画の魅力について講演させていただきました。
以下、小津監督とDonald Richie に捧げた文章を掲載します。
小津〜Richieの映画から、映画の権力、ファシズム、吉田喜重、ワイズマンにも言及してます。
On Dec 12 we had a special event at Japan Society commemorating Yausjiro Ozu’s 110th anniversary of his birth and 50th of his death. It included a reception and a screening of “Late Autumn”, Ozu’s late masterpiece starring Setsuko Hara, Yoko Tsukasa, Mariko Okada and Shin Saburi. The event was also dedicated to Donald Richie, Japanese cinema giant who introduced Ozu and Kurosawa to the west. (He deceased on Feb 19, 2013.) I gave a speech before the screening on Ozu and Richie. Here’s what I said.
———————————————————-
Introduction of Yasujiro Ozu & “LATE AUTUMN”
By Atsushi Funahashi
Today I’d like to celebrate two people.
The first is the great film director Yasujiro Ozu.
It would be his 110th birthday this year, and it’s the 50th anniversary of his death.
The second is Donald Richie, for his lifelong dedication to Japanese film.
He passed away on February 19 of this year.
These men are two of the greatest figures in Japanese cinema.
I’d like to start by saying a few words about Donald Richie.
Richie was a pioneer – the first to introduce Japanese cinema to the Western world.
I never knew him well, and we only exchanged a few words at film festivals.
But all the programmers, critics, and directors who influenced ME were influenced by Richie. So I feel a strong affinity with him.
Tony Raynes at the British Film Institute, and Max Tessier from the Cannes Festival, Director Paul Schrader from New York, Japanese film critic Shigehiko Hasumi… All of them reference Richie in their own writing.
I think it was impossible for them to consider Ozu and Akira Kurosawa, without the Donald Richie filter.
It’s no easy feat to spread one’s influence so far and wide… It’s almost scary. Anyone who studies Japanese cinema… I guarantee they’ll run straight into Richie.
And it’s just because he loved Japanese cinema so much. His words struck the essence of Japanese cinema.
Ozu was one of his favorite filmmakers.
In his 1974 book, OZU, he said the director was the most “Japanese” filmmaker as viewed by the Japanese. It was true then, and is probably still true today… half a century after his death.
The Japanese media, and many critics, still say Japan loves Ozu. Outside the country, he’s put together with the images of Zen, Haiku, Buddhism, Japanese cuisine… all icons of Japan. In London, across the Thames river from Big Ben is a Japanese restaurant called… you guessed it: Ozu. His name is at risk of becoming a simplistic cliché.
But Donald Richie didn’t bundle those iconic elements together with the director. He analyzed him as a filmmaker, and cautioned readers against associating those images with Ozu.
Richie criticized Western critics who labeled Ozu’s films as slow.
In his book he says, “Ozu doesn’t have many stories. Each one is rather, an episode. There isn’t much by way of action. And on the surface, it may seem like there’s nothing much going on. But when you look closer, you’ll discover that Ozu’s films have their own tempo, their own sense of time… And that sucks the audience into the narrative. Those of us who get emotionally involved in Ozu’s films… lose all concept of time. And that’s what counts.” (translated from Japanese version OZU)
Richie continues, “The viewer can feel the intensity that brews under the surface of everyday life. It’s the most intriguing drama you’ll find onscreen. And it’s important for the audience to detect that emotion for themselves. Because it’s not explicit. This process of discovery is intertwined with Ozu’s concept of time. Ozu’s drama is all about hidden potential.”
This concept affected me profoundly. And a great director I respect very much, Kiju Yoshida, has a similar opinion. He also said “’Showing’ moving images is power. It’s an ability to influence.”
When we look back at history, Nazis, fascist leaders, harnessed the power of moving images. They created propaganda that tapped into people’s emotions. Cinema can effectively be a weapon.
But Ozu didn’t think that way. He believed cinema was not what you showed viewers, but what you didn’t. In other words, Ozu believed in his audience’s ability to fill in the blanks. To really SEE.
I think there are only a few filmmakers in the world who can pull that off. Here in the US, Frederick Wiseman’s one of them. He doesn’t explain. He trusts his audience to SEE, imagine, and understand what’s contained in his images. That’s how he moves the story forward. For Wiseman, the ability to see is the ability to understand society better. And to know what it means to be human.
So, as in Ozu’s films, you’ll find repeated sequences, where a setup similar to the beginning of the film comes up again at the end. And that’s because by then, he knows the audience has learned something about the world of the film. And that’s why the repetition doesn’t feel repetitive.
For Ozu, it was very important to observe daily life – how people behave – and the slightest wavering of their emotions. And that’s what matters in his films. It’s what drives the drama.
Ozu used to say: “The most important thing is what echoes inside the viewer when they leave the theatre.”
That quote shapes me as a filmmaker. I also think that’s pointing to the essence of Ozu films.
It’s how he constructs his pictures… by carefully layering those subtle nuances until all the pieces come together at the end.
So for Ozu, it’s all in the details. All in the nuances.
And through those subtleties, we realize we have much in common with the people Ozu depicted in his films – how they behaved. And Ozu’s pacing is hypnotic… the nuances are addictive. That’s when you realize you’ve lost your sense of time. I think that’s what Donald Richie meant when he said, “time itself doesn’t exist in Ozu films.”
Now, let’s lose ourselves in this masterpiece: Late Autumn.