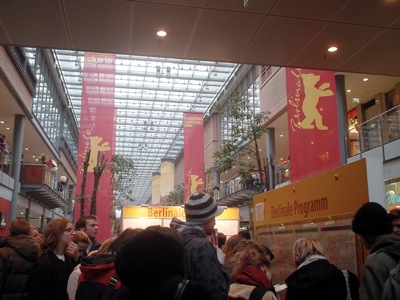 The Berinale 2009 has ignited today!
Christoph Terhechte, programme director of Forum section, talks about “Deep in the Valley” in his interview.

INTERVIEWER
Another theme this year seems to be the relationship between the generations and the question of preserving tradition.

CHRISTOPH
“Deep in the Valley by Funahashi Atsushi is a good example of that. The generational conflict in this film plays out in Yanaka, a neighbourhood in northeastern Tokyo where the old spirit of the city can still be felt. The filmmaker uses memories of a five-story wooden pagoda that burnt to the ground there in 1957 as a kind of hook for a cinematic engagement with the locals’ sense of tradition. What’s interesting about this film is that it is a documentary that also includes scripted elements. One of the plot lines is set in the present and tells the story of a film club looking for 8mm footage of the fire. A second plot line is based on a Japanese novel and tells the story of the pagoda’s construction. A young architect had to break with his teacher in order to build what was at the time a new kind of pagoda, which then went on to become a masterpiece of Japanese architecture. So of all people it is this young man who committed the impossible act of knocking his master off the throne that the older generation admires today as one of the great founders of tradition. This relativizes the conflict between the generations very nicely, I think.”

Here’s the full interview.
http://www.berlinale.de/en/das_festival/festivalprofil/berlinale_themen/Forum_2009.html
Also, here’s another write-up on the festival’s webstie.

At the Forum 2009, filmgoers won’t just have the chance to discover a wealth of new names and cinematic signatures. A whole range of filmmakers who have already shown one or more films at previous editions of the Forum will also be making a welcome return.